The following originally appeared in 2015 on the blog of one my literary heroes, Ed Gorman. Ed passed away in October 2016. But you can still read some of his final musings at newimprovedgorman.blogspot.com.

Like anyone who has spewed forth a book, I’m occasionally asked what the toughest thing is about writing. I’ll mumble something about the difficulty of making time to write when you have a full-time job and family, or trying to write when you’re not inspired, or something equally cliché.

But I’m lying. I don’t want to talk about it, but there is one thing that even after writing two books is BY FAR the hardest thing to do.

Knowing how to show the rifle.

You probably recognize the phrase. Anton Chekhov famously wrote that if you show a rifle hanging over the mantle in Act I it had better go off in Act III or you shouldn’t mention it.

Chekhov was referring to keeping extraneous detail out of your writing. If something doesn’t serve a distinct purpose to plot or characterization, chop it out. Great advice.
But for me, “showing the rifle” is more about burying the clues that my protagonist uses to solve the mystery the book is about. Because what you want to do is show the rifle, sure, but do it in such a way that when the gun goes off, it’s a complete and utter surprise to the reader. For my money, the hardest trick in literature.

In this context, of course, mystery is an all-encompassing term, not a particular genre. Every book… heck, every tale ever told is at its heart, a mystery. Every protagonist has a problem that must be solved, and the story consists of the obstacles and clues he finds along the way that enables him to solve the problem, be it romantic or galactic.

I’m a pretty easy audience. I’ll put up with wooden characters, familiar scenes, trite dialogue. As long as the story is moving at a good clip, I’m happy. But the second the detective suddenly produces a clue that was conveniently not mentioned when she first “noticed” it, or pulls some piece of arcane knowledge out of thin air, I’m out of there.

Of course, the opposite is true as well. There are few things more irritating than reading a setup that is so obvious it might as well be outlined in red, then biding your time for the rest of the book for the “big reveal” on page 277 that you knew has been coming since Chapter 3.

So I obsess over the rifle.

It’s nerve-wracking. You painstakingly plant clue after clue, then scuff just enough metaphorical dirt over each one, hoping they go unnoticed even though to you it’s like there’s a big, red arrow pointing at each one that screams “LOOK, LOOK! SETUP FOR THE END OF THE BOOK HERE! RIGHT HERE! HE’S GOING TO REFER TO THIS LATER DURING HIS *SHOCKING* PLOT TWIST! BE WARNED!”

Fortunately, of all the reviews of my books, no one has ever said anything about the big red arrow. In fact, I have even gotten a few “I totally did not suspect the twist at the end!” What I consider to be the absolute highest praise any plot-driven author can receive:

There is no rifle in the Traveler books. At least, not yet. But if I put one in, it will definitely go off. And if it’s still a surprise after I telegraphed it for you just now, I’ll take that as a compliment.

Five decades ago, six-year-old Dennis Green was channel-surfing (all three channels that were available), when he landed on KMTV, the Omaha NBC affiliate, just in time to see this creature fill the TV screen, all twelve inches of it.

Scared the shit out of me.

It wasn’t until years later, when like all Geeks-In-Training, I started watching Star Trek reruns after school, that I realized the creature that had given me a week’s worth of nightmares was the Salt Vampire from “The Man Trap.” And later I learned that even though “Where No Man Has Gone Before” was the (second) pilot, “Man Trap” was the episode that the network suits chose to air first.

Read on Blastr why “The Man Trap” was a better choice for a debut episode than we ever thought.

I can’t say with 100% certainty, of course, that what I saw wasn’t a rerun. But I choose to believe that I watched the Star Trek premiere on September 8, 1966.

At least thirty-seven seconds or so of it.

Dennis Green laughed and laughed when I introduced myself to him at a Minneapolis radio conference in 1995. The then-Vikings coach was a guest speaker.

“You’re lucky you don’t live around here!” he chortled. “Your phone would be ringing all the time.”

By all reports, he was a class act. Football (not to mention the world in general) could use more like him.

Thanks to everyone who stopped by the Imagine Other Worlds with Authors event in Cedar Rapids. It was a great chance to talk books with readers and authors.

Special kudos to Terri LeBlanc, Dana Beatty, and Aaron Bunce for all their hard work putting the event together.

But next time, I want to be further from the singing Coke Machine…

In honor of the book fair, and for anyone who was not able to get there, the Prisoner ebook is on sale for the VERY FIRST TIME, marked all the way down to 99 cents. Traveler is also just a buck, but only for five days.

Pick them up on your Kindle by Thursday!

(An occasional series about the music that inspires me when I write, much of which ends up referenced in the Traveler books)

Roger McGuinn, Gene Clark, and Chris Hillman were three of the founding members of The Byrds.

The trio reunited in the late Seventies as McGuinn, Clark, Hillman, and released an album that has always been one of my favorites. Long-time fans who were looking to hear the signature Byrds sound probably were disappointed, as McGuinn, whose throaty tenor was the hallmark of that group, stayed pretty much in the background. Instead, Clark and the always-underrated Hillman payed homage to the new country rock sound popularized by the Eagles.

While this particular ensemble would not come close to achieving the success of musical cousins like Glenn Frey and Don Henley, they provided me with the most memorable concert experience I ever had.

McGuinn, Clark, Hillman toured in 1979 as the opening act for America, another group who were pretty much printing money by mixing pop, rock, and country. I went to the concert with a school chum named Steve Halberman.

Eric Clapton was playing in Omaha the next night, and every time a dark-haired slim fellow walked past, Steve and I joked that it must be Clapton.

We did not stop to consider how unlikely it was that if the guitar legend actually was present, he probably would not be sitting in the second balcony.

As the MCH set drew to a close, Steve saw something on the side of the stage that made him turn to me and cry “We need to get to the front!”

So we dashed to the main floor, just in time to watch Slow Hand himself stroll onto the stage and join the former Byrds in a rollicking jam on “Eight Miles High.”

Nothing against America, but their set was a total anticlimax after that. I don’t remember any of it.

(This is taken from “More Than Zarathustra” originally published in Perihelion SF magazine. Read the full article here.)

At first listen, the original Star Trek Theme seems to be a pretty conventional orchestral piece, using classical forms, as most TV and movies themes of the era are. But Alexander Courage’s composition has its roots in jazz.

In a 2000 interview, Courage explained that his inspiration for the main part of the theme is from “Beyond The Blue Horizon,” a pop tune from the 1930s. Courage said it gave him the idea for a song which was a “long thing that…keeps going out into space…over a fast moving accompaniment.”

This swing version of the song, by Jack Hylton and his Orchestra, illustrates that.

But the most interesting musical parallel is apparently coincidental. The Star Trek theme shares a harmonic progression with the jazz standard, “Out of Nowhere.” That is to say, the two songs share the same several notes, played in the same order, to form each tune’s main melody (“the hook” in music parlance).

“Out of Nowhere” was introduced by Bing Crosby in his 1930 film Dude Ranch, and was Bing’s first Number One hit. You can definitely hear the melodic similarity in Bing’s version, but when Charlie Parker and Miles Davis slowed it down and made a ballad out of the tune in 1947, the resemblance is downright eerie:

It’s difficult to believe that Courage wasn’t familiar with “Out of Nowhere,” but he never mentioned it as an influence, and absent an “unconscious plagiarism” ruling of the sort that led George Harrison to pay a bunch of money to the composer of “He’s So Fine,” we are left with the resemblance as a coincidence. But a coincidence that the show has had some fun with.

In the first season of Star Trek: The Next Generation, Gene Roddenberry suggested doing a detective story based on the holodeck, and writer Tracy Tormé got the job of writing “The Big Goodbye.” In the process, Tormé created the character of 1940s literary detective Dixon Hill, one of the most memorable additions to the Star Trek canon.

As Captain Picard enters Dixon Hill’s office for the first time near the beginning of the episode, a radio is playing “Out of Nowhere.”

It was producer Robert Justman who suggested the Easter Egg. A jazzer would say he was “hip” to the connection.

(It’s interesting to note that Tracy Tormé is the son of legendary jazz singer Mel Tormé. The younger Tormé would go on to co-create “Sliders,” and cast his famous father in the show.)

A musician friend of mine also insists there is a scene in Voyager that takes place on Earth at a Star Fleet reception where a combo is playing “Out of Nowhere,” but I haven’t been able to locate it.

Jonathon Frakes happened to play the trombone, which led the ST:TNG writers to send Commander Ryker to a holodeck jazz club to unwind. Ryker’s musical bane was “Nightbird,” which he could never master.

In fact, once jazz broke into the Star Trek franchise, it would play a small but significant role in every series.

A word of advice: Don’t hint to a jazz musician that the best way to enjoy the music is to stupid and emotional.

TSF is free this weekend on Amazon. Click on this link to download it. But hurry, sale ends May 17. 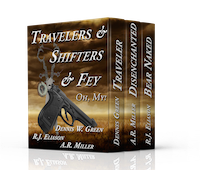 A collaboration between three Iowa authors to introduce you to each of our series for one low price!

At the time, we thought it was cute for him to put his brother in the barber chair. Kinda glad I did not see that article at the time. 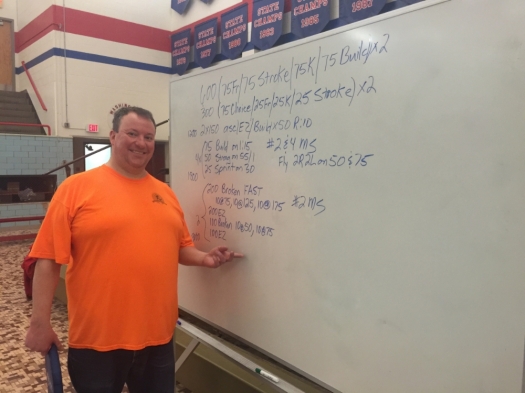 Our white Board looks like the one on Big Bang Theory.