Every year, millions of dollars in promotion is spent advertising and promoting what you can buy and do on the day of the THE BIG GAME.

This is because the NFL has convinced all of Business and Industry that owning the copyright to the phrase “The Super Bowl” means the NFL has the power to designate who can utter those magical words. 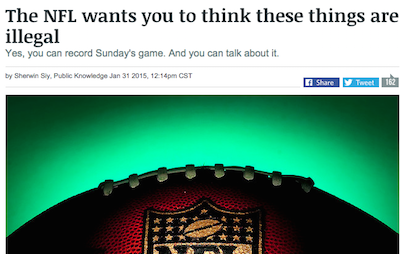 Nearly every year at this time, Ars Technica points out this is a load of hooey. As the article points out, the point of trademark law is make certain someone doesn’t try to pass off a fake or knockoff as something that has been trademarked. It has nothing to do with permission to refer to it. Click on the image if you’d like to to read the full article.

In the meantime, let’s test this theory out…