In honor of Fry Fest, I am republishing the story of how I learned first-hand what a great person the legendary Hayden Fry is.

It was 1980, Coach Fry’s second year as Iowa’s coach. These were the days before there was one Hawkeye radio network. Instead, there were several stations that originated the game and fed their own small network. WHO had Jim Zabel, WMT Ron Gonder and KXIC (AM 800 in Iowa City) had Gene Clausen.

I was a sophomore at Iowa, working my first radio job, a part-timer at KXIC. One of my jobs was to help with the football broadcasts. This entailed running the board back at the station during the game and also producing a weeknight call-in show that featured Coach Fry answering questions posed by Gene and the sports directors of the other stations in our network, mainly stations in Southeast Iowa towns like Burlington and Muscatine.

Gene and Hayden broadcast out of a conference room, wearing headphones so they could hear the questions posed by the other sports directors, whose voices were piped in over open loop that allowed all participants to hear each other and interact.

We taped the call-in show on Tuesday nights, which was the hardest practice of the week, the last time the team went full speed before tapering into the game. So, Hayden was usually tired after a long day and his conversations with Gene after the show ended were pretty free-wheeling. Listening in from the production studio was, shall we say, educational. But, that’s another story.

One Tuesday, there was an equipment glitch in the conference room, none of the microphones worked. So Hayden and Gene had to come into the tiny production studio with me.

To fully understand the story, you need to know just a little about radio studios are designed (Radio folks: Please feel free to skip to the next paragraph). In a radio studio, speakers are always automatically muted when the microphone is turned on, to eliminate feedback. This is why you always see DJs wearing headphones when they’re talking.

So, here’s the scene. Hayden and Gene are squeezed into two chairs in front of the control board, sharing the studio’s only microphone. I was perched on the edge of the counter. There was only one headphone jack, so my job was to keep the mic off so Hayden could hear the question, then turn it on so he could answer. And, that was how it went for nearly the full hour of the show:

Then for some reason, I lost the rhythm, and turned the mic ON while the away sports director was speaking, and clicked it off just in time for the three of us to hear:

“..at do you think about that Hayden?”

Oh, crap. I have just screwed up Hayden’s call-in show. My career is over.

Hayden signaled for me to turn the mic back on, and said “Y’all mind repeating the question? I guess I wasn’t paying attention.”

The guy repeated his question, obviously a little annoyed, but we managed to survive the show. Neither Gene nor Hayden mentioned my gaffe. Hayden could have blamed technical problems, or the idiot kid who didn’t know how to do his job.

But he took it on himself. It was a little thing, but it was taking care of the little things that made him a great coach and a good person.

Hayden Fry went on to take the Hawkeyes to three Rose Bowls, become the dean of Big 10 coaches and this weekend will again be celebrated by the entire state of Iowa at the festival that bears his name.

But I will always remember the coach who took the blame for an error made by a green producer whose name he didn’t even know.

Author, Author! (is what I’ll be shouting in February). Just so Alex Green﻿ is forewarned.

Jazz keyboardist George Duke passed away on August 5, at the age of 67. 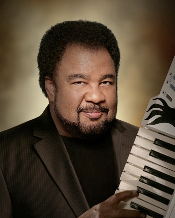 I vividly remember the obvious joy in playing that both Stanley Clarke and George Duke demonstrated through the entire show. Damn, they looked like they were having fun!

The video below captures a little bit of what I remember, although the small confines of the TV studio where this performance takes place did not allow Stanley Clarke to leap and bound from one end of the stage to the other, in one of the most acrobatic music performances I have ever seen. Duke, with his “key-tar” slung over one shoulder, matched him move for move

If there was a square foot of the Hancher stage he didn’t touch, it was because there was a drum set or guitar amp there already.

The Clarke-Duke Project LP also included a fun version of “Louie, Louie;” (video link also below) that is still a favorite of mine. This marked the first time I was every able to decipher the words to this mumbled Kingsmen classic, which included a smart lyric addition by Duke:

The moral of this story is

When you sail the Seven Seas,

Take your woman with you

And set your mind at ease!

The concert ended with Clarke and Duke jamming on the tune, pulling audience members up and giving them the chance to sing.

No one knew the actual words to “Louie, Louie”, of course, which provided some entertaining moments at the the show I saw, and I’m sure much hilarity during the tour.

Ironically,  the friend I attended with, a jazz reed player, did not care for the concert. She said it was “too pop.”  I countered that it was hard to tell two people who were obviously having the time of their lives that they were doing it wrong.

I hear that today from time to time, that jazz is “serious” music, and that if the music is too pop or accessible or fun, that it’s not true to the genre.

I don’t agree, and I think mssrs. Clarke and Duke would agree with me.

Rest in peace, Mr. Duke. I hope that wherever you are now, you are smiling as widely as you were when I last saw you.