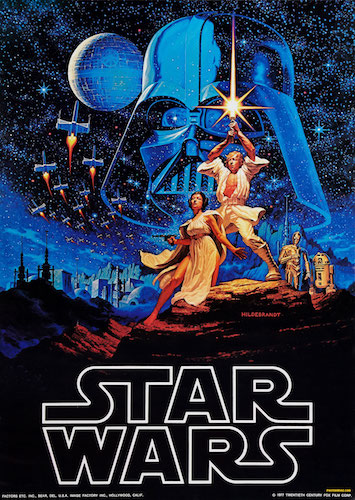 The movie, of course, was Star Wars. Jim and I were what today would be celebrated as geeks knowledgeable in a variety of arcane Sci-Fi and Fantasy lore.

In the Seventies, they just called us weird.

As far as the movie was concerned, I was ambivalent.

(My apologies to Alan Dean Foster. In his defense, he had no idea the book he was ghost-writing for George Lucas would spawn a literal galaxy of stories. He was just trying to stitch something together from what I am sure was a pretty bare early version of the script. And if you ever pick up a copy of that original novelization, you’ll be amused by some of the remarks about the history of the Empire and Old Republic that are– well, let’s just say no longer canon.)

“I’m going back to see it again tonight,” Jim continued. “You need to come. We’ll need to get there early. There was a big line last night.”

And so we did. We arrived ninety minutes or so prior to show time at Omaha’s Cinema Center, kind of a dingy multiplex that today has been turned into an indoor gun range.

We staked out our spot in line outside the single room in which the movie was showing, and waited. Jim was so excited to share the unique look of the movie that one point, he insisted on cracking open the door a little so I could get a preview. I only saw a few minutes of what I would later learn was the Death Star running blaster battle, but it was enough to realize that something special was going on.

Finally, the show was over, and we waited impatiently for the prior crowd, dazed by what they had just seen, to exit. We took our seats, and a few minutes later, the Twentieth Century-Fox fanfare sounded, followed by the first notes of John Williams’, which would become just as legendary.

I don’t have to go in to my reaction to the movie. If you’re reading this, you probably have memories just as fond of the first time you saw it.

The drive home, between concrete barriers that narrowed Interstate 80 due to construction, made it seem like it was us who were barreling through a trench on the Death Star toward a small thermal exhaust port.

Thus began what I will always think of as The Summer of Star Wars. We saw the movie just about every weekend, dragging whichever of our friends (including long-suffering girlfriends) we could induce to go.

I stopped counting at seventeen viewings, not very impressive in today’s Netflix-bingeing era, but quite a commitment in the days you had to schlep out to a theatre across town and buy a ticket in order to satisfy your Star Wars craving.

May 28th is also the birthday of son Jack. I wasn’t thinking about Star Wars the night he was born, but I do remember that the day I introduced him and his brother to the movies a few years later was the closest I ever got to the feeling I had when I watched it the first time.