No matter where you travel, you will always bump into someone from astonishingly close to home.
-Green’s First Rule of Travel

Rare indeed has been the trip where The First Rule never came into play. But on a recent trip to Arizona I mentally lifted the rule because:

a) I was attending a University of Iowa alumni event. And,

b) It was Phoenix in February, for cryin’ out loud. This time of year, there are more Iowans in Maricopa County than there are in Grundy County.

Iowans everywhere, not even a challenge. 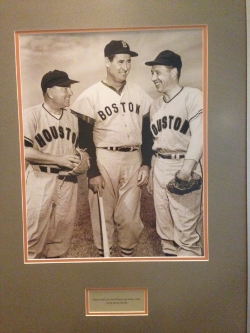 But then, I was checking out the celebrity photos of the hotel where we were staying and right, alongside pictures of the resort’s founder, one Robert Foehl, posing with celebs like Robert Wagner, Natalie Wood and Tony Curtis, I came upon one with baseball greats Ted Williams and Bob Feller.

Just because The Heater from Van Meter is no longer alive doesn’t make him any less of an Iowan.

Oh, and then at the Tortilla Factory there was that guy at the next table who looked just like a fellow I did Follies with a few years ago, but that was just a coincidence, I’m sure.