I hope the Gazette soon puts a moratorium on complaint emails from out-of-towners who receive tickets from speed cameras. This one really takes the cake. 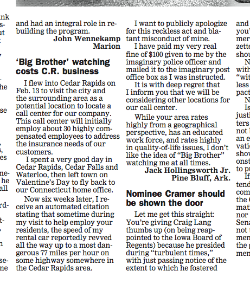 This guy says he was going to bring his company to Cedar Rapids, but not any more!

Why? Because he was caught doing NEARLY 80 MILES AN HOUR THROUGH DOWNTOWN.

The nerve. What was Cedar Rapids thinking, not wanting someone to drive almost 30 mph over the speed limit?

And, I’m sorry, but these complaints that speed cameras somehow infringe on our liberty is hogwash. If you broke into a store and were caught by a burglar alarm rather than a passing cop, you’re just as guilty.

You drive eighty miles an hour, you get a ticket, it’s on you. Blaming the device is just being a spoiled brat.

I hope you find a town to locate your company in that doesn’t bother to enforce it’s laws. Let me know how that works out for you.

One Reply to “Enough From the Whiny Scofflaws”