I try not to let a winter season go by without shilling at least once for my favorite snow removal product, The Snow Wolf. As the picture shows, it in essence is a wheeled snow shovel, enabling you to push and lift far more snow than with a regular shovel. 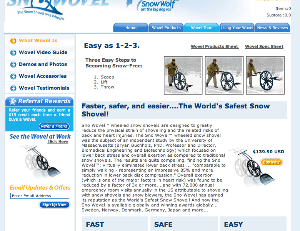 It changes the back-breaking labor of shoveling into a decent aerobic workout without the awful smell of two-cycle fuel and maintenance issues associated with a snow blower.

Also called the Sno-wovel (I think the company de-emphasized that name because they realized no real man would talk up a device whose name made him sound like he was doing a Tweety Bird impression), this thing makes it possible for a middle-aged guy like me to easily clear my entire driveway and sidewalks in a half hour or so.

How does that compare with a snow blower? This morning, I was done BEFORE my next door neighbors, who were using both a snowblower AND a shovel. Last week, another neighbor and I finished at about the same time. He joked it was like John Henry vs. the Steam Hammer.

Fortunately, without the cardiac arrest at the end of the race.

(Want one? Email me and I’ll send you an order link).

Middle-aged public radio manager, occasional writer and stage performer. You can find me at the Washington H.S. pool many mornings at 5:30am. View all posts by Dennis Green