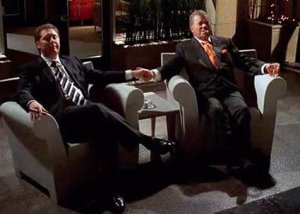 We all love to hear the musical sound of our own names, which perhaps can partly explain why,

when I first saw an episode of “Boston Legal,” many years ago, my hero William Shatner had to repeat his character’s name several times (which as I recall, was also an intrinsic dialogue element), before I realized he was saying “Denny Crane,” not “Denny Green.”

Now, if you’ll excuse me, it’s time to adjourn to the veranda for brandy and cigars.